I tried to write about the Côte&Ciel Isar Rucksack, which I got in medium last winter for $289. But several people out there were much more thorough—and positive.

It’s a good looking backpack and well-constructed. Personally, though, I became frustrated with it over the course of a 3 week overseas trip. The padded pocket did not hold my 13″ retina MacBook Pro snugly (it’s designed for up to 15″). The iPad pocket wasn’t ideal. Also, it’s not easy to keep the front compartment (“sharkfin”) organized. This is because you put everything in while it’s horizontal, but you carry it vertical. Things shift all over the place during use, and it becomes difficult to find things. Fully loaded, it barely fit under some airline seats.

When I returned home, I sold the Isar and replaced it with the Visconti Carter. It’s a small, affordable messenger bag constructed from buffalo leather. There are two outer pockets, the most useful being on the exterior flap. This pocket is great for storing thin items that are quickly needed, such as boarding passes (try as you might, airlines always find a way to stick you with paper in 2015). It has well placed pockets, and enough of them, without allowing you to put too much in it. I can easily include: 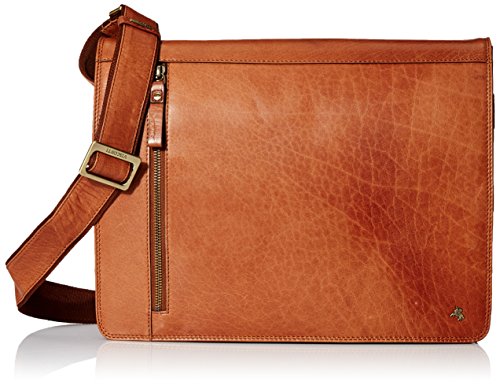 The main issue in carrying the camera is a lack of padding. I don’t find this to be an issue as much with the MacBook Pro. If you know of a minimalistic camera sleeve that fits into messenger bags well, tell me on Twitter!)

I’ve only noticed one construction issue: the synthetic backing material on the strap was slightly frayed in a couple places. I used a little bit of fabric glue in those spots, and it’s good to go. However, the leather and other fabrics are very nice; it’s double-stitched, so it should be very durable. A solid win for this bag is that it supports itself (unlike my old Fossil messenger, which collapsed when set down).

Much of the hardware is brass, which looks very nice. The zippers are very smooth, but almost every zipper-pull is different. The one on the outside flap is leather. The one on the back and on the tablet pocket is articulated brass. And the one on the small interior pocket is a standard pull. The miniature brass version of their marque is very classy.

Right now, this is my ideal everyday bag.