“Like every other attempt to undo the tragedy of Babel, Esperanto was ultimately a failure.”

The dream of a universal language will probably never come true unless God should act to restore mankind to one language. And considering that we’re doing a pretty bang-up job of ruining things and going against his will – the reason for His creating language barriers – without a universal language, it makes sense that that would continue to be a barrier.

Goals are an important part of self-improvement. They should be specific and measurable; however, I am not good at this. Nevertheless, I am trying to set some sort of goals for myself. Here are a few:

My desire to learn German is partly because I lived there as a child, partly because it’s part of my family’s background, partly because learning a language is generally a good way to expand one’s horizons. To learn German, I’m currently using an iPhone app called Duolingo (free; App Store). It’s constructed as a game, which has really helped me learn some basics. I don’t clearly understand the grammar concepts at this time, but I have to start somewhere.

Reading the Bible daily is a very valuable habit when coupled with thoughtful meditation on what is read. Though many people attempt to discredit the Bible, the fact of the matter is that those who truly work to apply what they learn from the Bible live happier, better lives. Its counsel is just as useful today as it was 2 000 years ago.

Acquiring my Network+ certification is being encouraged by my employer, but I also realize I need to continue to expand my professional knowledge and skills. I find networking to be a very dense subject, though, so I’m unsure of how well this will go.

Finally, I’d like to build a stereo cabinet in the mid-century modern style. I am in very preliminary stages of making this happen: I have just started sketching out concepts and I have no cabinet-making skills. I want modern functionality with vintage looks. Unfortunately, modern components are not designed with this in mind. Practically all receivers are big black boxes. This will take some investigation and hunting.

I’m definitely looking forward to meeting these goals over the course of the year. A new language, a piece of furniture as the result of new skills, reading a book with proven advice, and a professional certification are great ways to improve myself. Let the work begin!

I love pens and stationery. I have probably bored friends more often than they deserve with my pen and paper induced excitement.

Many people go through life not thinking a great deal about the pens and paper they use. Some go a little beyond that and find a pen they really like; for example, lots of people are amazed by the Zebra F-301 ballpoint. It looks and feels nice with that stainless steel barrel and textured plastic grip. I think it’s a good pen, but my tight grip has broken the plastic threading on several.

I think it’s safe to say that most people never use a fountain pen. My first was a Lamy Vista with a fine (F) nib (after much research, it’s pronounced LAH-mee), which can be described as a demonstrator fountain pen: it has a clear barrel that allows you to see how much ink remains in the cartridge. I desperately want to switch to an extra-fine (EF) nib; I like thin lines, and the Lamy fine nib lays down what I consider a rather wide line.

At some point after that, I heard of the Pilot Namiki Vanishing Point. Though it was extremely interesting, it was also extremely out of my price range for a pen: somewhere between $125 and $175. Then, out of the blue, an acquaintance gave me one in blue carbonesque with rhodium accents, F nib. It’s a great pen, though again, I’d like to switch to the EF nib (a $70 switch, on average).

The next fountain pen I’d like to acquire is the Kaweco AL Sport, EF nib, though I haven’t yet decided on a color (seriously thinking about black). At $78, it will be a planned purchase. They have some great ink color options for these.

I have not explored papers a great deal. I’ve used Moleskines quite a bit, but the paper leaves something to be desired. Next set of notebooks will probably be Rhodia Webnotebooks, or Webbies, with dot grid paper. I’ve heard they’re great for fountain pen inks. Can’t wait to find out for myself. 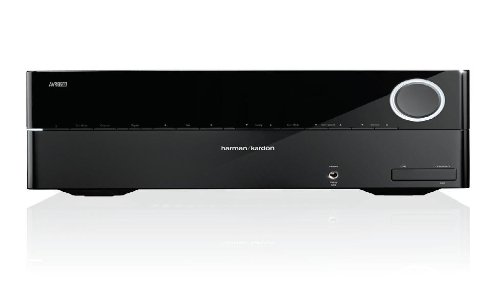 I have been thinking about purchasing an audio/video receiver for some time; a recent Best Buy sale influenced me to purchase one. The Harman Kardon AVR 1700 (Amazon affiliate link) receives generally very good reviews. While I am happy with this receiver, there are a couple things I wish I had noticed when examining the description and reviews. So here’s my take on the AVR 1700.

I am very happy with the appearance of this receiver, especially in comparison to most receivers in this price range on the market today. However, I really would have liked to find a modern receiver with vintage looks, including the lighter metal. Reason being that I have the goal of building a stereo cabinet in that midcentury modern style.

Following the trend among most home entertainment devices today, the AVR 1700 is network capable. However, it cannot connect to wi-fi. So, unless you have an ethernet cable right next to your audio/video equipment (as we do not), its network functions including AirPlay, vTuner internet radio, and DLNA-capable devices will not function out of the box. I ended up purchasing a Netgear Universal Wifi Adapter (affiliate link). Why not an AirPort Express? It was twice the cost, I wasn’t completely sure it would serve this purpose, and it would have needed a power outlet, which is in short supply (the Netgear can be powered by the USB port on the AVR 1700).

The AVR 1700 is AirPlay capable, with a caveat. It only receives audio. It will not pass video or pictures through to a connected TV.

As depicted above, the volume knob has a blue ring of light surrounding it. Some people may like this feature, some may not; a number of reviewers state that it makes the device look cheap. I read that the feature can be disabled, but could not find any documentation on how do to so. After fiddling around, I managed to turn the light off, but I am unaware how.

I am a novice when it comes to audio equipment. A number of online commentators suggest that the AVR 1700 is far too light to be a quality receiver, since it weighs in at less than 13 pounds. I am personally very happy with the sound quality, even though I do not currently have all 5 speakers.

There are thirteen buttons on the face of the receiver, lined up with the power indicator light. They are not illuminated and their labels are diminutive, which makes it difficult to easily determine what function each carries.

The AVR 1700 is packaged with a button-laden universal remote, which I have not tried to program and which is a bit unwieldy.

The receiver can display its menu on your television screen. I find this preferable to being limited to the built-in digital display. However, the presentation of the menus is appalling — the typography appears completely unconsidered and there are no helpful graphical cues. The built-in vTuner radio cannot be searched; it can only be browsed in a folder-based system.

Maybe this is expected, but I was glad to find that all inputs can be programmed as a certain device. For example, our DVD player is connected to input HDMI 1. I can program HDMI 1 as source Disc, so that when I press Disc on the remote, it switches to our DVD player as the source.

Overall, I am happy with this receiver, but do see room for improvement. It is capable of software upgrades over the network, so maybe Harman Kardon will make some improvements?

On a Windows computer, there’s little question that Microsoft Office is the best productivity suite. I never really cared for Word; Apple’s Pages is much better. However, Excel easily trumps Numbers in capability and ubiquity. Even so, my nerd-self enjoys the challenge of making Numbers work for me. This is the first quick tip for Numbers.

Say you want to re-arrange information in a spreadsheet. If you simply copy and paste the rows or columns, they will overwrite the existing cells. Instead, you have to Copy (Cmd+C) then Insert>Copied Rows or Copied Columns — depending on what you’ve copied. This is not available via shortcut or context menu.

As an aside, trying to setup a keyboard shortcut for Insert Copied Rows in System Preferences did not work for me. Is there a solution for this?